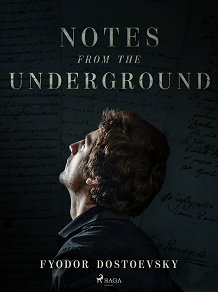 Notes from the Underground

by Fyodor Dostoevsky
I am "a sick man . . . a wicked man . . . an unattractive man" I am corrupted by self-loathing and spite!

"Notes from the Underground" is a novel by Fyodor Dostoevsky, delivered as a series of delusional memoirs of an angry and spiteful narrator. Often presented as Dostoevsky’s most revolutionary novel, the social isolation and alienation of the character is depicted not only as rebellious, but as transformative as well.

Misanthropy, disturbing episodes, existential squalor, and unpleasant interior portrayal turn the novel into a double-edged tool: both to humiliate and be humiliated; both to suffer and inflict suffering. The quite humane portrait of the character is also very disturbing – it is a person you can meet today at the station, in the queue behind you or sitting next to you on the bus.
Fans of serious literature, the classics and of Dostoevsky will not be disappointed.

Fyodor Dostoevsky (1821-1881) was a famous Russian writer of novels, short stories, and essays. A connoisseur of the troubled human psyche and the relationships between the individuals, Dostoevsky’s oeuvre covers a large area of subjects: politics, religion, social issues, philosophy, and the uncharted realms of the psychological.

There have been at least 30 film and TV adaptations of Fyodor Dostoyevsky’s 1866 novel 'Crime and Punishment' with probably the most popular being the British BBC TV series starring John Simm as Raskolnikov and Ian McDiarmid as Porfiry Petrovich.
'The Idiot' has also been adapted for films and TV, as has 'Demons' and 'The Brothers Karamazov'.