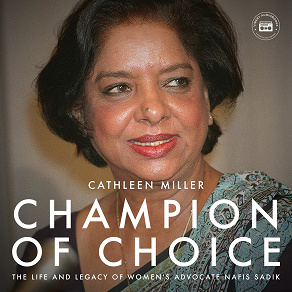 Champion of Choice: The Life and Legacy of Women's Advocate Nafis Sadik

by Cathleen Miller
Not many women can claim to have changed history, but Nafis Sadik set that goal in her youth, and change the world she did. Champion of Choice tells the remarkable story of how Sadik, born into a prominent Indian family in 1929, came to be the world’s foremost advocate for women’s health and reproductive rights, the first female director of a United Nations agency, and “one of the most powerful women in the world” (London Times).

An obstetrician, wife, mother, and devout Muslim, Sadik has been a courageous and tireless advocate for women, insisting on discussing the difficult issues that impact their lives: education, contraception, abortion, as well as rape and other forms of violence. After Sadik joined the fledgling UN Population Fund in 1971, her groundbreaking strategy for providing females with education and the tools to control their own fertility has dramatically influenced the global birthrate. This book is the first to examine Sadik’s contribution to history and the unconventional methods she has employed to go head-to-head with world leaders to improve millions of women’s lives.

Interspersed between the chapters recounting Sadik’s life are vignettes of females around the globe who represent her campaign against domestic abuse, child marriage, genital mutilation, and other human rights violations. With its insights into the political, religious, and domestic battles that have dominated women’s destinies, Sadik’s life story is as inspirational as it is dramatic.

"A dense biography of Dr. Nafis Sadik, who changed the world for women through her work on population control."
—Kirkus Reviews
Listen to sample
Log in to borrow