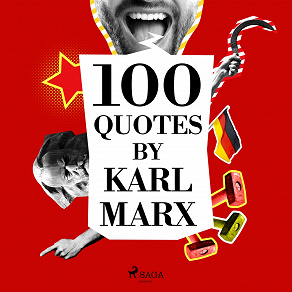 by Karl Marx
‘100 Quotations by Karl Marx’ is a collection of thoughts and theories by one of the most progressive thinkers of the 19th Century. Often witty, sometimes wry, but always thoughtful, you’ll find quotable lines on everything from politics to philosophy. A superb read for anyone with an interest in the founder of communism or those who want an introduction to one of the most complex minds in history.

A philosopher, political activist, and revolutionary thinker, Karl Marx (1818 – 1883) was born in Germany. He was educated by his father until the age of 12 when he attended Trier High School. From there, he enrolled at the University of Bonn. While he wanted to study philosophy and literature, his father insisted that he study law.
After moving to Berlin in 1836, Marx became enamoured of the teachings of George Wilhelm Friedrich Hegel, a renowned German philosopher. After achieving a PhD from the University of Jenna, he moved to Cologne and worked as a journalist for the left-wing ‘Rheinische Zeitung’ newspaper, which allowed him to hone his socialist beliefs.
Considered to be one of the founders of communism, and the eponymous progenitor of Marxism, Marx completed a number of important works in his lifetime, including ‘The Poverty of Philosophy,’ and ‘Value, Price, and Profit.’