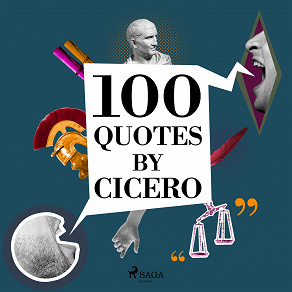 by Cicero
‘100 Quotes by Cicero’ is a collection of thoughts and reflections from a man who rose to power and fell to grace. Musing on life, philosophy, and power, Cicero employs his epistemological beliefs to create incisive musings that are as relevant today as they were in Ancient Rome. A fascinating and quotable book for those with an interest in history or philosophy.

Born into a wealthy family, Marcus Tullius Cicero (106BC – 46BC) was a Roman statesman, lawyer, Academic Skeptic, philosopher, and writer. After completing his education in both Greece and Rome, he served in the army before establishing himself as a powerful legal orator and representative.
A firm believer in the republican values of the time, Cicero was instrumental in quashing the Second Catilinarian Conspiracy, and was subsequently invited by Caesar to join the First Triumvirate. However, Cicero turned on the Emperor and was soon exiled.
After being granted a pardon, he made an enemy of Mark Anthony and was eventually executed. His most famous works include the poems ‘On His Consulship,’ and ‘On His Life and Times.’