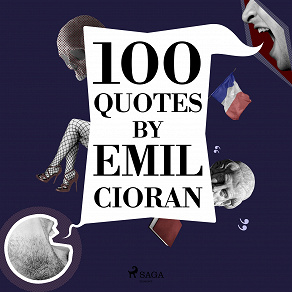 by Emil Cioran
‘100 Quotes by Emil Cioran’ is a thought-provoking collection of thoughts and sayings from one of the most contentious writers of the 20th Century. Wry, witty, dark, and melancholic, they offer an insight into Cioran’s influences, with more than a few signposts pointing towards the likes of Nietzsche and Schopenhauer. Sometimes funny, sometimes dark, and sometimes brooding, this is a unique book from one of the world’s most singular writers.

Considered by many to be one of the most rebellious thinkers of his time, Emil Cioran (1911 – 1995) was born in Hungary. After leaving school, he enrolled at the University of Bucharest, alongside other luminaries-in-waiting, including Eugene Ionesco.

Having been schooled in German, Cioran soaked up the thoughts of German philosophers, such as Nietzsche and Schopenhauer. These helped to hone his own philosophical beliefs, resulting in a train of thought that was rooted in the tragedy of life.

His most famous works include ‘The New Gods,’ and ‘On the Heights of Despair.’ The majority of his writing is characterised by a deep pessimism, possibly fuelled by his lifelong battle with insomnia. However, Cioran refused to concede this point, preferring to see his work as wry humour and subversive thought.