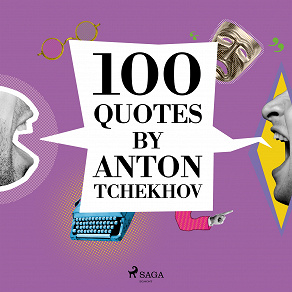 by Anton Chekhov
Peppered with pithy and wry observations, ‘100 Quotes by Anton Chekhov’ offers an insight into one of the greatest literary minds of the 20th Century. Covering a variety of topics, you may find yourself surprised as to how many of his musings have worked their way into everyday life. A superb book for those who want to get to know the man behind works such as ‘The Seagull,’ and ‘Uncle Vanya.’

Anton Pavlovich Chekhov (1860 – 1904) was born in Taganrog, in Southern Russia. The son of a grocer, and the third of six children, he was educated at the local Greek School. After Chekhov’s father became bankrupt, the family lived in poverty, before fleeing to Moscow to avoid debtor’s prison.
After writing a series of tales for various publications, Chekhov started to gain critical attention. However, it was a trip to the Ukraine that put the literary wheels in motion. After the publication of his novella, ‘The Steppe,’ he was commissioned to write a play, resulting in ‘Ivanov.’

Over the course of his career, Chekhov wrote more than 200 short stories and 14 plays. Works, such as ‘The Seagull,’ ‘The Cherry Orchard,’ and ‘Uncle Vanya,’ have been performed on stages across the world. Chekhov's works have also been adapted to the screen numerous times. The 2018 adaptation of 'The Seagull' stars Annette Bening, Elisabeth Moss and Saoirse Ronan.