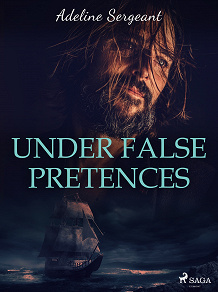 by Adeline Sergeant
When Richard Luttrell is killed in an apparent accident by his brother, Brian, a cataclysmic chain of events is set in motion.

‘Under False Pretences’ follows the fortunes of Richard’s younger cousin, Hugo, and his mission to uncover the truth behind the killing.

As Hugo travels the globe, he uncovers a long-kept secret and is faced with some life-changing decisions.

Throw in no fewer than two shipwrecks, a kidnapping, and the occasional dose of ‘brain-fever,’ and you’ve got all the ingredients necessary to cook up a rollicking adventure!

‘Under False Pretences’ is a taut novel, full of twists and turns. It is the perfect read for those looking for an introduction to Sergeant’s work.

Emily Frances Adeline Sergeant (1851 – 1904) was one of the most prolific novelists of the 19th century. Born in Derbyshire, Emily was the daughter of Richard Sergeant, a Methodist missionary, and Jane Hall, a writer of children’s books. Jane published her stories under the name Adeline, which Emily was later to adopt.

During her lifetime, Adeline Sergeant wrote over 90 novels, including ‘The Story of a Penitent Soul,’ ‘No Saint,’ and ‘The Idol Maker.’ Many of her works explored the theme of religion, as her views changed from committed faith to agnosticism, and finally, to Catholicism.