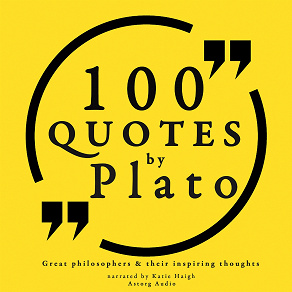 by Plato
Alfred North Whitehead once noted: 'the safest general characterization of the European philosophical tradition is that it consists of a series of footnotes to Plato.' Plato is indeed considered the most pivotal figure in the development of philosophy, along with his teacher, Socrates, and his student, Aristotle. But his writings are often light, fresh and funny; it was Plato who invented the dialogue in philosophy, which make a point very easy to follow and the occasion of various scenic arrangements. Plato is one of the most dazzling writers ever known; we have selected for you one hundred of his best quotes, for you to find inspiration and get acquainted with this fondamental part of our culture.