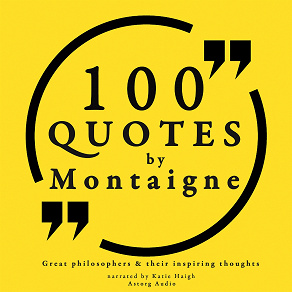 by Michel de Montaigne
Montaigne might well be one of the most sympathetic writers ever known. He is known for popularizing the essay as a literary genre; his style merges casual anecdotes and autobiography with deep intellectual insights. His Essays are among the most influential ever written; one can recognize Montaigne's direct influence on great literary figures all over the world, from René Descartes to Nietzsche, Isaac Asimov, and possibly William Shakespeare. We have selected for you 100 of his most fascinating, insightul, and amusing quotes, so you can meet directly with one of the greatest minds who ever lived.