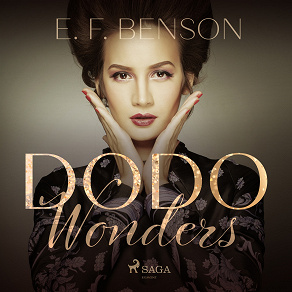 by E. F. Benson
'Dodo Wonders' is the third and final installment in the 'Dodo' series by E. F. Benson. The series was rumoured to be based on Lady Asquith, though she herself claimed that she had little in common with the character of Dodo - except the splendour of her drawing-room, perhaps.

The glitzy life of Lady Dodo Chesterford is abruptly interrupted by the arrival of World War I. Along with her husband and their friends, Lady Dodo is faced with the challenge of rapidly adapting to an unfamiliar and dangerous new environment.

'Dodo Wonders' delicately reveals the history of the First World War in Britain while also unfolding an intricate love story. Dodo is a charming, vivid heroine with whom it becomes almost a pleasure to move through wartime.

Edward Frederic Benson (1867-1940) was a British archeologist and author. Originally from Berkshire, he studied at Cambridge University and published his first novel 'Dodo' in 1893. It was an instant success. He was a prolific novelist and wrote a blend of satire, science-fiction, supernatural and romantic melodramas. He has been admired by later authors such as H. P. Lovecraft. He was also a reputed memoirist and wrote an acclaimed biography of Charlotte Brontë. Benson was a very discreet character but it is widely assumed that he was homosexual, based on the circles he moved in as well as the characters in his fiction. He never married and passed away in 1940 at the age of 72.
Listen to sample
Log in to borrow