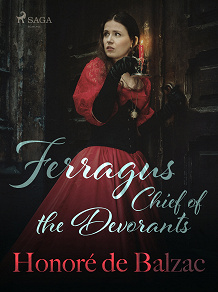 Ferragus, Chief of the Devorants

by Honoré De Balzac
In 'Ferragus, Chief of the Devorants' Balzac skillfully traces a dazzling panorama of 19th century Parisian streets and vividly invokes a sparkling menagerie of characters in ultra-fine detail.

A young cavalry officer strolls down these very streets when he spots a beautiful lady in the company of an ill-reputed man. The man is veiled in an impenetrable cloak of secrecy, which also raises questions about the woman at his side, transforming the novel into a thrilling criminal escapade.

Flooded with murders, prison escapees, family secrets, and tragic endings, 'Ferragus, Chief of the Devorants' is a darkly ironic albeit sublime reflection of the human condition and the ultimate price of deceit.

Recommended for readers who are fascinated by the forays into the human soul and conscience deliberated in Dostoyevsky's 'Crime and Punishment' and Gogol's 'Dead Souls'. Also, Guy de Maupassant, Flaubert and Emile Zola were naturalist writers who were directly influenced by Balzac.

Honoré de Balzac (1799-1850) was a French novelist and playwright, most famous for his collection of novels and plays, collectively called 'The Human Comedy'. His detailed observation of humanity and realistic depiction of society makes him one of the earliest representatives of realism in Europe. He was a master-creator of complex characters that often found themselves in ambiguous moral dilemmas.