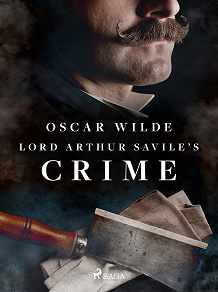 by Oscar Wilde
‘Lord Arthur Saville’s Crime’ is a darkly comic short story by Oscar Wilde. The story follows Lord Arthur, who is informed by a fortune teller that he will become a murderer. This revelation deeply disturbs Lord Arthur and to unburden his mind, he decides to murder someone at once and forget the whole ordeal. However, Lord Arthur discovers that this task is not as simple as it seems, and a comedy of errors ensues as he concocts more and more ludicrous schemes to achieve his goal, from poison to dynamite and beyond. This short is social satire at its finest as the nobleman travels further into a labyrinth of insanity and murder simply because it is his supposed fate to do so. ‘Lord Arthur Savile's Crime’ is a hilarious parody of the Gothic genre and portrays Oscar Wilde as a comedic genius. This wickedly entertaining short is recommended for fans of Franz Kafka.

Oscar Wilde (1854-1900) was a popular Irish playwright, novelist, essayist, and poet. Some of his most celebrated and well-read works are ‘The Picture of Dorian Gray’ and ‘The Importance of Being Earnest’. Wilde’s life ended in tragedy as he was sentenced to prison due to acts of gross indecency with men and died at a young age shortly after being released. Although Wilde’s life was cut short, his influence lives on to this day and he is celebrated as one of the finest writers of his time. His work has been adapted for stage and screen many times, including an announced ‘Dorian Gray’ film directed by musician St. Vincent.