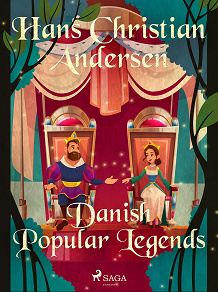 by Hans Christian Andersen
'Denmark is rich in old legends of heroes, of churches and manor houses, of hills and fields, and of the bottomless moorland. These stories date from the days of the great plague, from times of war, and from times of peace. They live on in books or on the tongues of people. They fly far about like a flock of birds, but they are as different, one from another, as the thrush is from the owl, and the wood pigeon from the gull. Listen to me, and I will tell you some of these legends...'