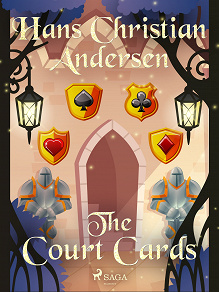 by Hans Christian Andersen
This this story, a little boy named William has a castle so large that it takes up a whole table top! The castle is painted so that it seemed to be built out of red brick and it has towers and a drawbridge... William opens the castle gate to peep into the spacious reception hall, where all the face cards from a pack - Hearts, Diamonds, Clubs and Spades - hang in frames upon the wall, like portraits in a real reception hall...