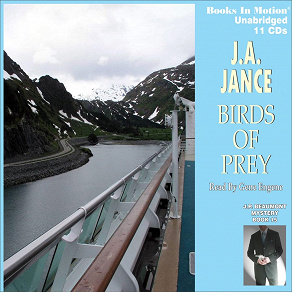 by J. A. Jance
Former homicide detective J.P. Beaumont may have cut himself loose from the Seattle police force, but that doesn’t mean he’s out of the game. As he accompanies his grandmother and her new husband on their honeymoon cruise to Alaska, murder suddenly makes waves when Beau finds himself the target of a gang of middle-aged divorcees, including a tempestuous lady named Margaret Featherman. When Featherman’s fatal fall from the ship is caught by a security camera, the only witness is a hapless Alzheimer’s patient. Mistaken for an FBI agent, Beau is inadvertently drawn into the investigation and he brings his skill and sardonic humor to bear on a case where clues are few but suspects abound.
Listen to sample
Log in to borrow